The Amazing Pawpaw by David Dietz 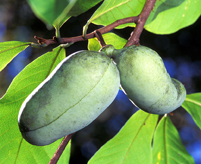 The amazing pawpaw is staging a comeback in American consciousness. This long overlooked fruit has always been with us, growing in the understory of our natural lands, especially in the river valleys and surrounding hills. Scientists believe that it evolved as a food source for now extinct megafauna, such as the giant sloth and wooly mammoth. At one time, Americans were more familiar with this truly American fruit, which is native to the United States east of the Mississippi River, and currently ranges from northern Florida to southern Ontario in the east, as far west as Nebraska and Texas, and as far north as Michigan.

Native Americans cultivated pawpaws as a food source, as it was the largest edible fruit indigenous to the land that is now the United States. In fact, the Shawnee even had a pawpaw month in their calendar. Europeans’ first documented encounter with the pawpaw was from Hernando DeSoto’s Mississippi Expedition in 1841, where one of the chroniclers noted its cultivation by the native people. In addition to the already belligerent nature of the expedition, a far more significant negative effect of DeSoto’s journey was the introduction of European diseases to much of the continent’s native population, resulting in widespread death from diseases against which they had no immunity. Scholars estimate that anywhere from 50 to 100 million native people lived in the Americas prior to European contact, with an estimated 90% of them perishing in the ensuing years. It is not hard to imagine that in pre-contact America, many established civilizations with thriving agricultural plantings covered much of the landscape–a landscape which would eventually revert to wilderness after the devastating epidemics had run their course. While pawpaws and other edible plants now grow wild throughout our lands, it is probable that many are descended from intentionally planted and managed Native orchards and forests.

The pawpaw has been valued by many throughout our history. George Washington claimed it as his favorite fruit, and pawpaws were grown at Mount Vernon and Jefferson’s Monticello. Jefferson is said to have believed the pawpaw had potential for cultivation, and sent seeds to Europe as an example of a uniquely American plant. The widespread fruit even proved useful  in feeding  the famous expedition of Lewis and Clark. They subsisted on pawpaws for three days at one point in their epic journey. 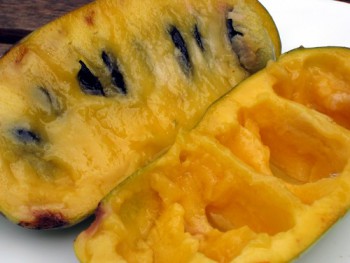 Pawpaws, which ripen for a short few weeks in September in our Southcentral Pennsylvania region, are a delicate fruit, not suitable for shipping. Easily bruised, they are not ideal for large scale commercial production. But they have always been a valued source of food for foragers and people living off the land. Throughout our history, pawpaws were a welcome treat for all kinds of people. From enslaved people to Presidents, the pawpaw has provided a delicious, nutritious treat for many. About the size and shape of a mango, the pawpaw contains a custardy flesh that tastes somewhat like a cross between a banana and a mango, interspersed by brown, lima bean-sized seeds.

Nutritionally, pawpaws are loaded with nutrients–they are an excellent source of vitamin C, and are also high in magnesium, copper, iron, and manganese. They are also a good source of potassium, amino acids, riboflavin, niacin, phosphorus, calcium, and zinc. These nutrients are found in pawpaws to a similar or greater degree than they are in bananas, apples, and oranges, all while containing a similar fiber content. 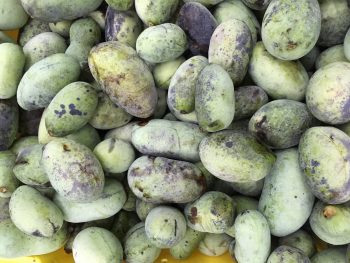 With a tendency to not be afflicted by pests or disease, pawpaws were a dependable source of food for people throughout history. Early American settlers relied on pawpaw groves for their fruit needs while they established their non-native orchards. The ubiquitous pawpaw provided names for places such as Paw Paw, Ohio, West Virginia, and at least a half a dozen other states. It even inspired folk melodies, such as Way down yonder in the Pawpaw Patch. During the Great Depression, the pawpaw was nicknamed “the poor man’s banana,” as it was an asset for foragers in tough times.

With the advent of supermarkets and the widespread availability of shipped produce after World War 2, the pawpaw receded from popular knowledge, as most Americans grew ever more distant from their once vibrant relationship with wild foods.

Meanwhile, several researchers made efforts to domesticate the pawpaw, and cultivars were developed, beginning around the turn of the century. Pawpaw breeding resurged in 1985, when R. Neal Peterson began a large-scale breeding program with the cooperation of the University of Maryland. Numerous named varieties have resulted from these efforts, and domestic production is slowly taking form. Pawpaw research is still a niche area of study, however, with little research funding available. Aside from private individuals, Kentucky State University is currently the only institution carrying on this work.

In the early 21st Century, with an explosion of farmers markets, and development of the slow food movement, pawpaws are now becoming more well-known again. Slow Food USA added the pawpaw to its Ark of Taste, further publicizing the nearly forgotten fruit.

With the Horn Farm Center’s emphasis on native plants, it seemed only appropriate that the pawpaw would find a welcome place in our landscape. About a decade ago, local Slow Food USA member and founding member of the Horn Farm, Richard Bono approached the Center with a proposal to establish a pawpaw orchard at the Horn Farm. HFC agreed to it, and the orchard was planted. It takes about seven years from planting a pawpaw until it bears its first fruit. With this understanding, Bono has faithfully and patiently tended his orchard over the years, and his orchard is finally beginning to bear fruit. Dick and his wife Judy have shared their enthusiasm for pawpaws over the years by organizing hugely popular pawpaw dinners and festivals. Click here for more information on this year’s Pawpaw Festival event at the Horn Farm Center.

The humble pawpaw is once more claiming the respect that it is due. As knowledge of this delightful fruit spreads, our national palette is notably enriched. More and more, pawpaws are being rediscovered and planted by home gardeners, and if you ever get a chance to taste one, you’ll know why.

“The Amazing Pawpaw” was written by Horn Farm Center Board Member, David Dietz

David Dietz has farmed in Hellam Township for most of his life. Growing up, he helped every summer on his parents’ truck patch farm, and he helped tend the roadside stand on the Lincoln Highway about a mile west of Wrightsville. Always interested in history, David earned a BSE in Social Studies from Millersville University in 1995, and spent several years teaching. Eventually, however, his love of the land drew him back to farming. In 2002, David started vending produce at York Central Market, where he continued until 2017. A founding member of the Horn Farm board, David helped start the Community Gardens and the Incubator Farm Project. Currently employed as the produce and dairy manager at Lemon Street Market in Lancaster, David is now interested more than ever in the challenges faced by local small-scale agriculture in a globalized commodity-driven economy. He is thrilled to see the Horn Farm Center leading with a vision for regenerative practices, learning from and working with nature. David is happily married to Waldorf teacher extraordinaire, Rochelle Dietz, and they have a delightful teenaged son, Gabriel.

Fall on the Farm – Call for Volunteers 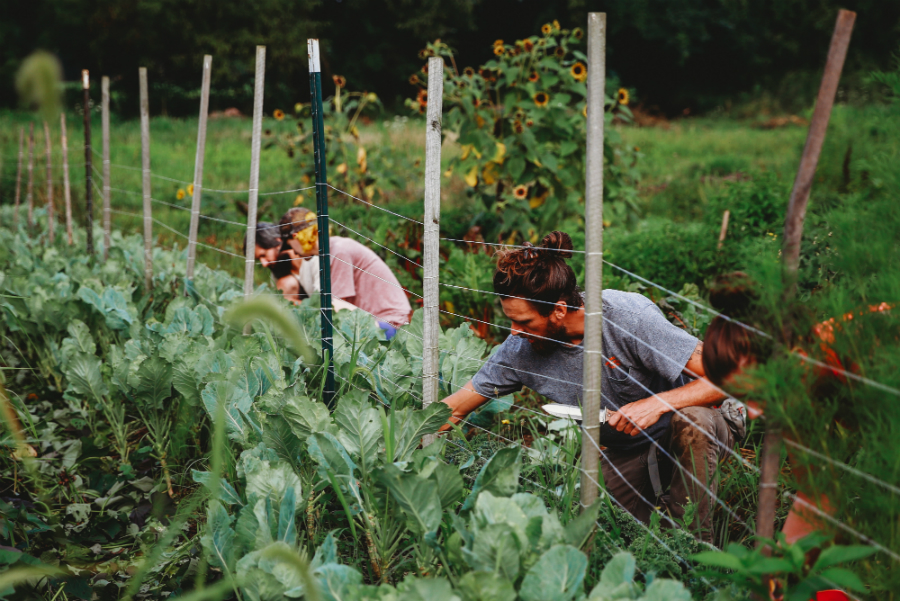 Eager to get outside and get your hands dirty before the winter months set in? Join Field Manager Andrew Horn for some time on the farm! Every Thursday from 10am-6pm, Andrew will be a holding volunteer field day on the farm. We will spend some time getting to know each other, discussing what’s happening in the fields and on the farm, plus there will be opportunities to pitch in to help with the fall clean-up.

Some of our end-of-season farm activities include: 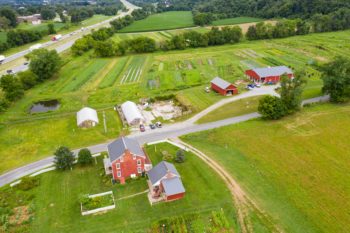 Do you have flawless administrative skills and a heart to change the world from the ground up? Consider joining the Horn Farm team! We are now hiring a part-time Executive Assistant who will help to support the mission of the organization by managing our administrative systems and keeping our team activities organized!

YOU might be just the professional we are looking for! Click here to learn more about the latest employment opportunity at the Horn Farm Center.

York County has moved into the green phase for dealing with COVID-19, so we are resuming some on farm classes with modifications. Classes will be held outside and are limited to 10 participants per class. If more than one class occurs on the same day, start times will be staggered to reduce the number of individuals arriving at the same time. Multiple hand sanitizer stations are available. We will adjust as needed as time passes and things change. Participants are required to bring a mask and wear when proper physical distancing cannot be maintained. Except for family members physical distancing of 6 feet must be maintained.